This locomotive was bought by the current owner as a “running engine” from a trader of model locomotives.

Ultimately this locomotive came in for a lot of work. It seems to have travelled through a few hands and had a “spray over” paint job.

This however wasn’t the case, the regulator would not work (stayed open), injectors would not work and safety valves wouldn’t hold 15psi. Plus a number of other steam leaks. The engine had also been spray painted without being taken apart first.

The boiler was removed to give access to remove the superheaters and regulator assembly. This was repaired. Some pipe work was replaced, the injector clacks altered and the steam leaks taken care of. Safety valves replaced completely.

The regulator had failed and was stuck open. A new graphite’s PTFE slide valve made and a better guide/retaining plate made.

A good clean of the chassis and once through a hydraulic test. The engine was reassembled. New springs fitted to the safety valves and a pair of new injectors, then a separate steam shut off valve for the hydrostatic lubricator fitted.

The engine is now a reliable performer, with plenty of power and very free steaming.

Although not run often, is still in good condition after its past life.

“What else would you expect from a 9f?” 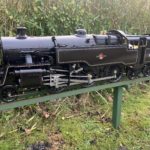 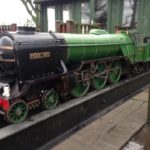 BR Jinty 5 Inch This 5” gauge Jinty came in for some attention to water feeds, a new whistle and ...
Read More

*** PLEASE NOTE - Due to Covid19, The BPLW Shop orders for steam loco fittings or custom parts have been suspended until further notice. You can however purchase Merchandise and some other items. Orders already purchased are currently in progress and we apologise for any delay. Thank you for your understanding. Any queries please contact us. *** Dismiss