I approached Ben with regards to my 4inch Fowler R3 road loco via his facebook page to see if he would be able to sort out issues i still had with the engine after it had previously been to another company for the same work but the work wasn’t completed to a satisfactory standard.

The engine would never run in reverse properly just to jolt, the water pump had stopped working, and the timing seemed incorrect, the brake rigging kept moving out of position and becoming locked up. The engine would only potter around a rally field and i never had much confidence to take it for a proper run. I gave the engine to ben on the Monday morning and by mid afternoon it was fully stripped down and problems became apparent, burrs on the eccentrics and the timing was completely out. Ben was very professional and thorough with his workmanship and by later that night the engines motion was back together and correctly timed.

Other jobs were completed the next day as per request by me. I really liked about Ben was he listened to what I the customer wanted to be done on my engine rather than him making his own mind up and not taking into account my opinions. Ben always kept me up to date with the progress via pictures and his thoughts on what he would suggest would be the right directions to go with jobs.

The engine was completed by the Wednesday evening with a steam up to check all was working fine. I took the engine to wales the following weekend and it did a 5 mile road run with no problems had the confidence back in the engine which i wanted from the start and ben assured me he would be there for any advice if i need him.

I thought the service he provided was excellent valve for money having spent a considerable amount more for half the jobs not to be completed. I would recommend to anyone to send there locomotives or traction engines to bp loco works for a professional and quality service. 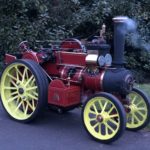 This site uses Akismet to reduce spam. Learn how your comment data is processed.

*** PLEASE NOTE - Due to Covid19, The BPLW Shop orders for steam loco fittings or custom parts have been suspended until further notice. You can however purchase Merchandise and some other items. Orders already purchased are currently in progress and we apologise for any delay. Thank you for your understanding. Any queries please contact us. *** Dismiss